The Birth of the Jug 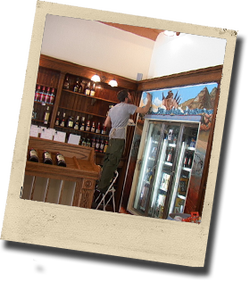 Arlie Dale's Jug Liquors opened its doors on February 21st, 2004. It was opened by Jerry, Sally and Chad Hixon to provide a service that was temporarily unavailable in downtown Salida, CO. That's right, after being open under different names "The Jug" was closed from being a liquor store for the first time since prohibition ended. It was briefly a real estate office in the front, massage studio in the middle and residential apartment in the rear. Downtown Salida residents were freaking out, so we decided to re-open this historic location when we learned the property was for sale.

We added "Arlie Dale's", Chad's grandfather's name, to Jug Liquors; the name of the store before its previous closure. Most folks around Salida knew this location as "The Jug", so we felt it very important to keep that in part of the name. The Jug today is Arlie Dale's Jug Liquors though to many locals it's still and will always be just "The Jug".

We decided that instead of just openeing another liquor store, we would make this one a little different. We wanted to open a shop that had everything nobody else had. We wanted to specialize in unique and high-end wines, specialty liquors and massive amounts of craft beers. And to top that we wanted to staff the joint with folks that wanted to come out from behind the counter and help our customers find something special.

Any of you who have patronized our store already know that we are anything but your everyday "Packy". We pride ourselves on having the Upper Arkansas Valley's best selection of wine, liquor and craft brews. On top of that you will find the service at our store to be top notch with a friendly and knowledgeable staff that is here to help you with all your libation needs!
1